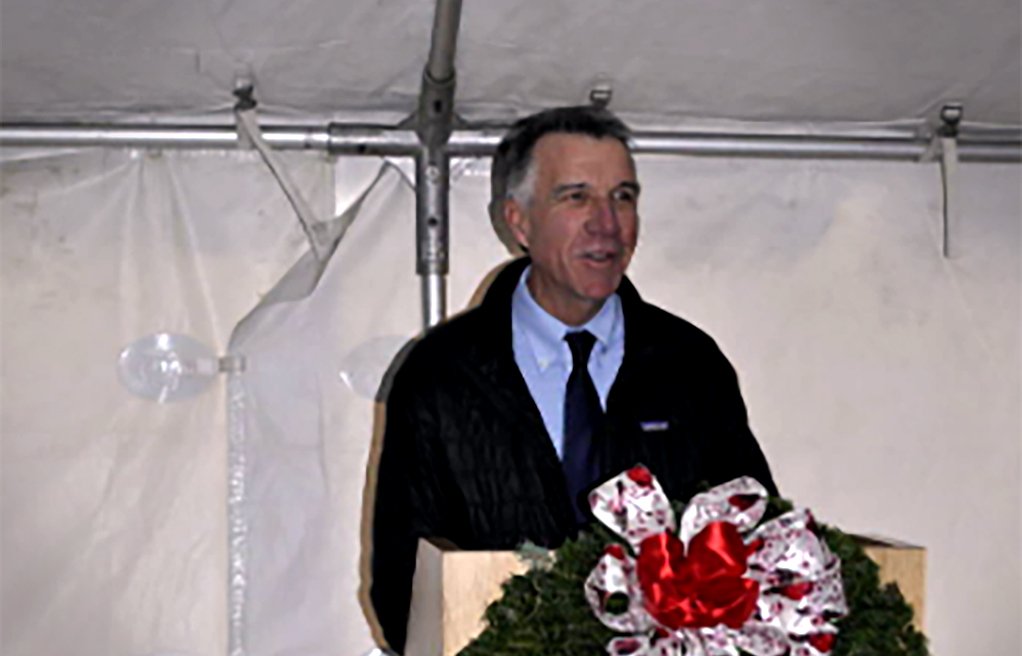 ST. JOHNSBURY, VT — A new mobile, sterile, medical-instrument-processing laboratory, built by Mobile Medical International Corporation (MMIC) on Portland Street, was celebrated with a visit from Gov. Phil Scott and members of his team, along with about two dozen company employees on Friday afternoon.

The state-of-the-art laboratory, which will allow hospitals that are renovating their Central Sterile Processing Departments for cleaning surgical instruments to do so on-site in the highly sophisticated mobile unit, is the first to go out in the field of what company CEO Jeffrey Paquet calls the third generation of such custom-built units.

Where it’s going exactly, and what it costs hospitals to lease was not disclosed, and one part of the mobile laboratory was off-limits for photos because of proprietary concerns.

Gov. Scott lauded the firm for its ingenuity, growth and for adding jobs in Vermont, and in particular, in the Northeast Kingdom.

The company has grown its workforce by 20 percent, said Scott, noting that the business had received a training grant from the Vermont Training Program to help with its growth.

he’s attended, looking around and saying, “I almost feel like I should be dropping a line in the ice!”

A day to celebrate a Vermont company doing well and adding jobs is a good day indeed, proclaimed the governor.

“We’re going to continue to face the challenges before us,” said Scott, “I’m committed to increasing these opportunities and prosperity for the State.”

Paquet said the workers at MMIC, joined by a handful of partnering companies in the area and beyond, and a good dose of “Yankee ingenuity” has led the business to not only focus on mobile hospital units which it is known for but to branch now into high-tech systems for water treatment for mobile sanitation labs and a system to track water quality.

A focus on the water quality systems and reporting for their own mobile sanitation laboratories has led to the birth of a new business for the company, shared Paquet.

Paquet, in an interview before Friday’s celebration, said the invitation to the governor and the event was staged to celebrate the new unit being completed and all the hard work of both MMCI employees and contractors who worked to realize the goal, among them Sutton River Electric and Trombly Plumbing.

Of those two local businesses helping to bring the project to the home plate, Paquet said, “This is way out of their experience level, they’ve been involved in all of it,” he said, helping the staff of 25 from the Northeast Kingdom and New Hampshire’s North Country to take on an expansion of their work by adding a new system and founding a second business.

Of the October 2019 launch of Verda Water Quality Systems — the new company — Paquet said, “The neat story about it really is of course, this is a very big idea and we have very big people who are interested in what we’re doing.”

One reason for the separate entity is to not confuse people interested in the water treatment and monitoring technology with the idea of mobile units which MMIC is known for and is its brand and even the first word of its business name.

“One of the reasons we’re doing it is simply because people know Mobile Medical as somebody who provides a temporary solution on a mobile platform, and this is none of that,” Paquet stressed in an interview this week, “We don’t want to confuse the market.”

The water treatment and monitoring systems will be leased to hospitals; the systems will be tracked through a cloud-based operation from St. Johnsbury to wherever the Verda systems have been leased.

Both Verda and MMIC will remain based in St. Johnsbury, said Paquet.

The new technology has been under development since March 2018, said Paquet.

“If all goes to plan, we will have to add,” said Paquet, “We’ll need more space, we’ll need employees.”

About 750 hospitals renovate each year and could be helped by the technology. Of that number, Paquet said, “If we could get a fraction of that, we’d be okay.”

“The systems grew out of the mobile fleet work,” said Paquet. “We had to do this for ourselves, and we turned around and said, ‘Wait a minute!”‘ and realized the innovations designed for their mobile labs could be a business unto itself.

The name Verda doesn’t necessarily have a meaning, but Paquet said the first syllable is a nod to the company’s home state, Vermont, and Verda also sounds like “vertical movement,” he said, “My goal was to pick a catchy name that meant nothing!”

The Verda systems will be marketed to hospitals “that are undergoing renovation in their sterile processing departments,” said Paquet. “It significantly reduces setup time and reduces significant costs for the customer and gets them to doing the job much quicker.”

“We’re pretty excited about it,” said Paquet. “We’ve introduced a revolutionary water treatment system that hasn’t been into the market before, and on top of that we’ve also introduced a compliance monitoring system which has never been introduced before.”

Paquet said, “Most hospitals have a department where instruments used in surgery come down from service and are de-contaminated, they wash off the big stuff and then they are put into some very sophisticated dishwashers and then once they come out of the dishwashers, steam sterilizers are used to essentially kill off any residual bacteria that could be on these instruments.”

“The key to that process is having water that meets a very narrow specification,” he said. “The equipment is very finicky about the type of water it uses in order to run properly.”

To address that issue, “We developed a system to support our work that turns out to be the most revolutionary system that’s on the market for use. It’s not just having clean water that’s important, you have to be able to prove with data that you continuously have clean water.”

Paquet said, “We have developed a very sophisticated system that uses over 40 different sensors that takes real-time data from the various parts of the water treatment system,” such as temperature, humidity and more “and beams it by cell service to a cloud platform.”

“We then send it back to Vermont no matter where the trailer is,” said Paquet. “We’re capturing all of the data from the water quality … and we’re able to provide reports back to the customer that they can show the organization that accredits them.”

Paquet said, “Nobody has done this, period, in the world.”

The new business, Verda, “is going to take these two pieces of technology and make it available not just in a trailer to help support what we’re doing, but to actually put it in the hospitals for them to use instead of what they’re using for water quality compliance.”

Paquet said, “At this time there is no single healthcare industry supplier that has a commercially viable, comprehensive system, and a suite of services necessary to meet the compliance criteria for solicitations from the Federal Government, MMIC believed there was a significant opportunity to provide a turnkey water quality solution to hospitals that includes all maintenance, management, and compliance reporting services,” Paquet said of the recent founding of Verda.

What mmic™’s Customers Are Saying

mmic™ is Featured in HealthCare Purchasing News- May, 2021 Edition

Comments made by mmic™’s CEO, Jeff Paquet, are featured in the May, 2021 edition of HealthCare Purchasing News. He discusses the effects on hospital sterile processing renovation plans caused by COVID-19. The article also features recommendations of mmic™’s Director of Business Development, Janet Lumbra, to include sterile processing staff in the planning of temporary facility […]

mmic™ has a mission to help our customers overcome the difficulties and disruptions caused when they renovate the most critical work areas in their hospital. We come by our tenacity and perseverance because it is baked-in to our employees’ DNA. In Janet Lumbra’s 27-year career at mmic™, she has survived cancer twice. Each time the […]

Never stop caring.
Please sign up to stay up to date on company news, new solutions, and announcements.